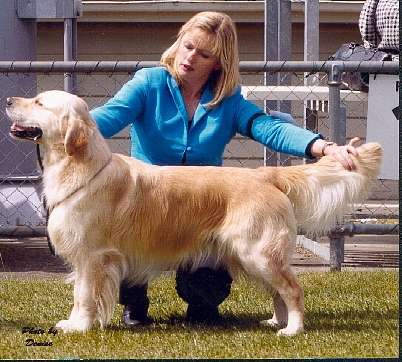 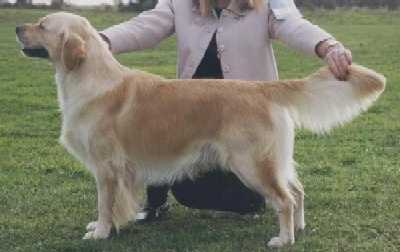 Cadet gains his Grand Champion Title on 7th February 2004 under Mr. J.Elston (S.A.). Congratulations to our very special friends Denise and John and of course our beautiful boy Cadet – I am so proud of you all. **Way to go Guys**!!!!

Grand Ch. Beaucroft The Cadet – “Cadet” lives in Hobart, Tasmania with Denise & John Wadsley (Heathbrook Golden Retrievers). Although Cadet was sparingly shown when he was with us, he gained his Aust. Ch. title with four 25 pt challenges by the time he was 2 1/2 years old.

Cadet was a true showman in every sense of the word, he would never let you down in the ring, plus on top of all of that he is an absolute pleasure to own never wishing to leave your side.

Cadet has been residing in Tasmania since August 2001 and he has certainly left his mark in the show ring there, taking Best of Breeds, In Group and In Show awards. He is a All Breeds Multi In Group Award and Best In Show winner, including Best In Show at the G.R.C. Specialty under Breed Specialist Miss. M. Dalos from South Australia.

Our sincere thanks and heartfelt appreciation goes to Denise, who showed and presented Cadet to absolute perfection. THEY WERE A PAIR TO BE RECKOND WITH!

At the 6th National Golden Retriever Show, Hosted by the GRC of Tasmania in Hobart.
Judge: Mr. & Mrs. Mills (England)

Sadly, Cadet is now retired from the show ring which he loved so much. He is enjoying his retirement life with Denise and John.