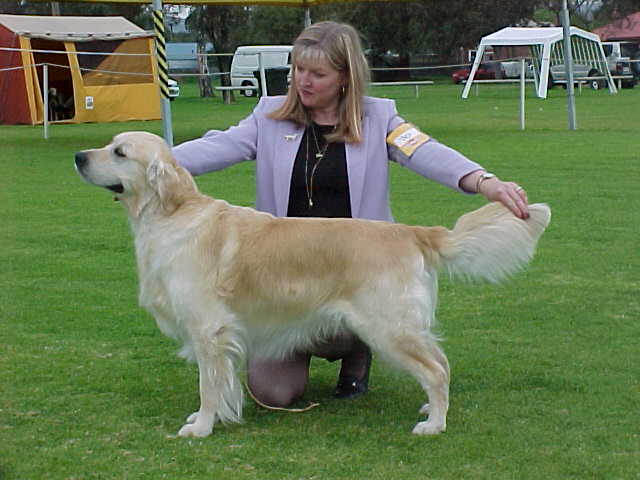 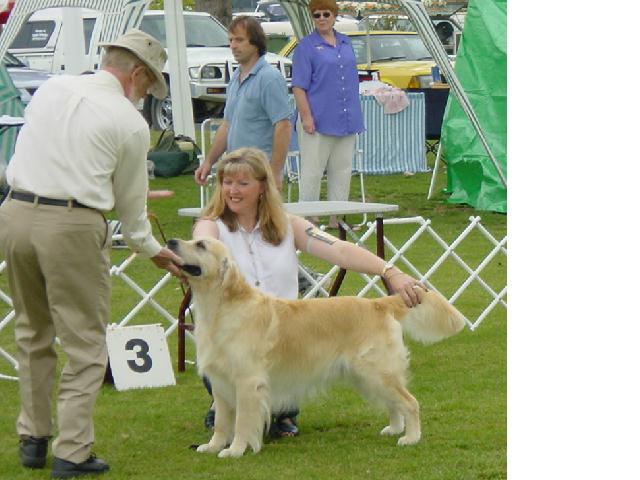 Achievements:
Aust. Ch. Beaucroft The Brigadier – “Brodie”. Actually, we should have named him Mr. Personality (or MP for short). He was such a character of a dog to own and live with, I could almost say he was human!!! He was also a true and devoted friend and he absolutely objected to leaving my side……..just ask anyone who tried to put him back in the crate whilst I showed another dog, he’d just lay down on the ground and wouldn’t budge….. he wasn’t going anywhere without me!

He also took on the chief baby puppy sitting duties where our two old boys before him, Commodore (Raff) & Commander (Maddie) left off. It must of been something in those genes for sure!

His achievements in the showring were also one to be reckoned with – Numerous Best In Shows All Breeds including a B.I.S. at The Victorian Gundog Club Championship Show 2001. He has never been unplaced at a Speciality show and at his last outing, on the last weekend of April 2004 at the 5th Golden Retriever National show in Sydney, Brodie won the Veteran Dog Class and took out the honour of Opposite Veteran in Show to the B.I.S. winner. What a fabulous thrill this was for us as it was Brodie’s last competitive show.

Also to his credit was the Melbourne Royal Show – Dog Challenge and Runner Up Best of Breed 1999 and Reserve Dog Challenge 2001. Plus many, many other wins and awards were added to his list.

Brodie amassed a total of 857 Challenge points which was not far away from the 1,000 Challenge points required for gaining a dogs Australian Grand Champion Title – unfortunately a damaged tail which resulted in coat loss prevented him from going on to obtain this title.

Aust. Ch. Beaucroft The Brigadier was temperament tested by the The Royal Blind Association of Victoria and was used in their Golden Retriever Breeding programme.

Brodie was never ever far from my side and he will always be in my heart. He now joins Raff & Maddie at Rainbow Bridge.

Sleep peacefully my gorgeous Brodes, as you have given us (especially me) and the breed some much…. you certainly did deserve the best!!! I say, till we meet again at Rainbow Bridge, you are forever imbedded in my heart!!