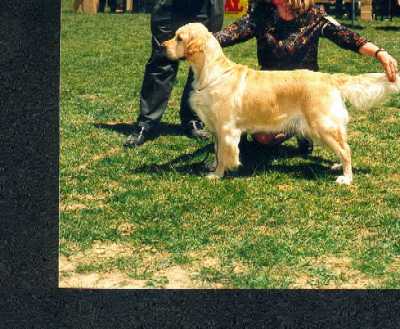 Achievements:
Aust Ch. Tweedwater Brengwain – “Bronni” was our foundation bitch to our kennel. She was chosen from many pups because of her breeding; her Sire being our own Aust. Ch. Heathermist Commander.

Bronni had three litters over her producing years, and probably the most standout feature was the impeccable temperament and bomb proof nature which she has been passed on to her many progeny and decendants from there.

Her achievements in the ring were also to be noted: Puppy Of The Year 1994, Runner Up Puppy In Group at the Adelaide Royal Show 1994 and Bitch Challenge Winner of the Year 1995. She also took from the age of 11 months, Best Bitch, Runner Up in Show and B.I.S. for 3 consective years at the G.R.C.V. Open Show. One of her most notiable wins and our proudest moment was her Best Aust. Bred in Show at Australia’s First Golden Retriever National Show in Adelaide under breed Specialist Mr. Bob. Sillence from the U.K.

Our sincere thanks and gratitude must go to Paul Stevenson in Tasmania for breeding and entrusting us with our lovely Bronni.

Now reunited with her Dad and Son at Rainbow Bridge. Bronni, you will always be in our heart of hearts and never forgotten. Thank you for the legacy you left us with!