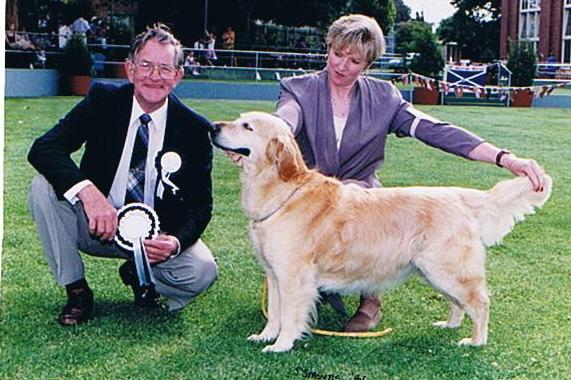 Achievements:
Sara was owned by Wayne and his parents Fay & Derek Pearson of Jindabo Golden Retrievers.

During Sara’s show career, she had many wonderful wins. One of the most memorable was at the G.R.C. of Victoria Championship show in 1989 by taking Runner-Up Best Exhibit in Show under world renowned specialist judge Mrs. Marianne Holm-Hansen (Tallygold Golden Retrievers) from Denmark. Sara was expertly handled by Derek on this day and you couldn’t wipe the smile of his face for months….years actually…!!! He was also so pleased and shocked that he had beaten me (Jill), his daughter-in-law for Runner-Up in Show and by the way, he has never let me forget it!!! Nothing like family rivalry!!!

Sara was a gorgeous girl both in the show ring and at home. At her very last outing she took Best Veteran in Show at the Scottish Breed Championship Show in December 1994. What a fitting end to her wonderful show career.